For curious newcomers and everybody who just want to try riding. 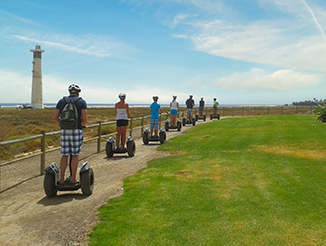 a
With the Segway to the steep west coast. Advanced driving pleasure guaranteed. 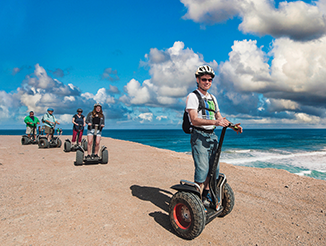 On old donkey trails through the interior of the island. Local culture, desert, always an adventure! 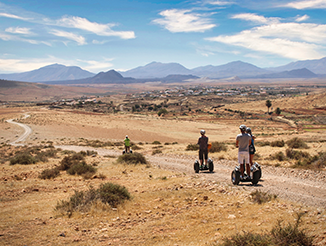 For our guests in the north of Fuerteventura! a great route along the coast with a visit to the museum of salt. 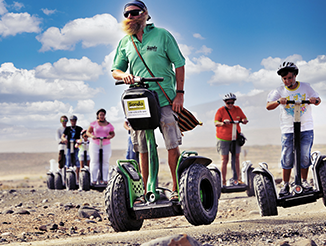 This futuristic vehicle is the locomotion of the future. The environmentally friendly electric scooter already conquered the cities of Europe. Even police forces and security personnel take advantage of a Segway PT worldwide.
As complicated as the technology also seems to be; The principle is very simple:
The Segway is powered by two almost noiseless and emission-freeelectric motors. With thehigh-perfomance lithium-ion batteries, it is possible to travel up to 38 kilometers without recharge. The driver controls his Segway by shifting your weight forward and backwards, as well as by tilting the handlebar.

But why the Segway can drive on an axis, without tipping over? Again, this is actually quite logical. Imagine, you stop and lean forward. Now you get to a point where you would tip over. Your brain responds and prevents this by moving your foot forward. The Segway has instead of feet wheels and a sophisticated system of sensors and control devices. An integrated software assembles the data and responds almost intuitively and 120 times faster than the human brain.
The advantage is that you don’t have to deal with buttons and levers. Get on and after a short briefing, you can securely and safely ride the Segway.

Get on and drive, the Segway follows you intuitively! 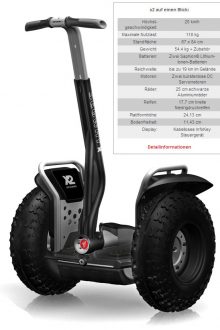 Our Segway station in Jandia is currently unmanned.
Please make your booking by phone, Whatsapp or email. We look forward to book you in.
Information about SEGWAY tours
Imprint
Privacy 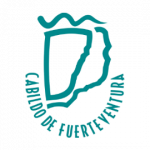